This massive trade deal, despite its implications for sensitive policy areas such as access to medicines and food safety across North America, Peru, Chile, Australia, Japan and beyond had, until recently, been kept far away from the public spotlight.

Negotiations take place behind closed doors and not even public representatives from the countries involved have access to the negotiating text.

Thanks to a series of leaks, however, the veil of secrecy surrounding the deal is slowly being lifted and what is at stake is coming much more clearly into focus. Last month’s leaked environmental chapter confirmed the worst suspicions of many green groups.

As reported by Chris Lang in The Ecologist recently, on issues from forest protection, to fisheries, to trade in endangered species, the deal falls way short of what they had proposed to negotiators.

And the lack of enforceability mechanisms makes the whole environmental chapter seem less like an attempt to implement robust international legislation and more like lip service to environmental concerns.

There is another chapter of the proposed TPP deal, however, that does have real teeth and that comes with strong enforceability provisions.

The investment chapter of the deal seeks to give corporations a wide range of investor rights and provide them with access to a system of international arbitration tribunals where they can have those rights enforced.

Unfortunately, these proposals for a parallel legal system for corporations embedded in the TPP are not just ideas floating on the horizon.

They are rather the extension of a system of corporate protections that has already been wreaking havoc for over 20 years – even though most members of the public have never heard of it.

An affront to democracy

Through the methodical construction of a web of bilateral and multilateral trade and investment agreements – now numbering several thousand – corporations have won concessions that would have been near impossible to win through an open democratic process.

These include the right of foreign investors to sue governments in international arbitration tribunals when public policies – like those designed to protect public health or the environment – or court decisions affect their investments.

Who has been the target of this system? Latin America, having spent two decades throwing off the yoke of the Washington Consensus and beginning to reclaim its economic sovereignty and control over its natural resources, has faced one attack after another.

Governments in the dock

In Bolivia, when the privatization of the water system in one of the major cities was rejected in the now-famous Cochabamba Water Revolt, San Francisco-based engineering conglomerate Bechtel sued the people of Bolivia for $50 million, having invested just $1 million in the country.

In El Salvador the people engaged in a democratic process to prevent a proposed gold mining project which threatened to contaminate their drinking water with toxic chemicals. 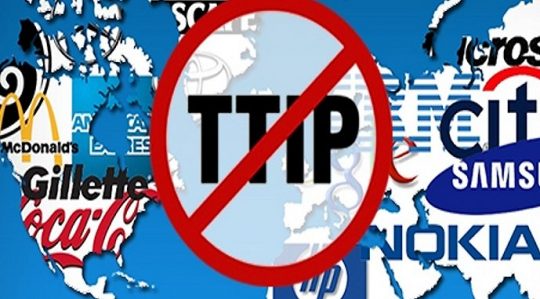 Red PepperTTIP: the Corporate Trump Card
Canadian mining firm Pacific Rim, recently taken over by Oceana Gold, has hit back with a $300m arbitration case. This is equivalent to one third of El Salvador’s national education budget.

And in neighbouring Costa Rica, mining firm Infinito Gold is suing the government for over $1bn following the rejection of an open-pit mining project that threatened areas of virgin forest and fresh water sources.

The current web of trade and investment agreements includes vaguely worded investor protections such as the right to “fair and equitable treatment” and the right to avoid “indirect expropriation”.

But the effect is that corporations can now sue governments for millions, sometimes billions, of dollars. And they can sue not just for what they invest in a country, but for what they had expected to earn into the future.

And it’s not only poor countries in Latin America that are in the system’s sights.

Even rich countries have cause to fear

In Germany, the decision to phase out nuclear power following the Fukushima disaster, despite being supported by the majority of the population and approved by the German Parliament, has resulted in an investment arbitration case by the Vattenfall Corporation that could be as high as $3.7bn.

In Canada, the decision of the regional government of Quebec to introduce a moratorium on hydraulic fracturing (‘fracking’) pending further investigations has resulted in a legal action for $250m by US oil and gas company Lone Pine resources.

The TPP would take this system and extend it even farther, giving corporations increased access to international arbitration tribunals to challenge environmental laws.

Allowing the expansion of the arbitration system would be like continuing to draw water from a well we already know to be poisoned.

We’ve seen this before with the Free Trade Area of the Americas, a similar initiative by the George W. Bush government to create a free trade area from the southern tip of Argentina to the northern provinces of Canada.

That deal was defeated following a coordinated campaign by civil society groups and progressive governments across the region. A similar effort is now required in the face of the TPP.

The good news is that until two years ago, the number of people aware of the investment rules system and the investor-state dispute settlement tribunals was limited to a room full of lawyers and policy wonks.

Since then, however, it has begun to surface as a public issue – and not just among environmentalists and fair trade advocates, even some governments and legal experts are waking up to the threat it represents.

When the deal’s proposed investment chapter was leaked in 2012 legal experts from the countries involved wrote this open letter to negotiators. It includes this passage:

” ... foreign investor protections included in some recent Free Trade Agreements (FTA) and Bilateral Investment Treaties (BIT) and their enforcement through Investor-State arbitration should not be replicated in the TPP. 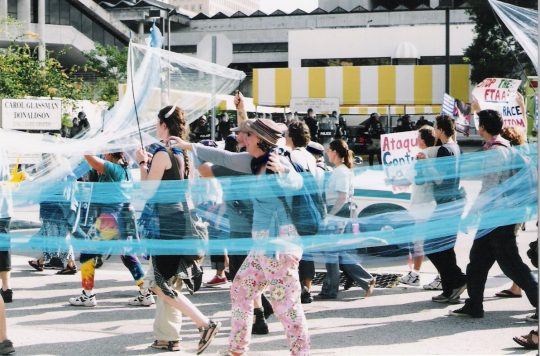 Foreign Policy in FocusCorporate Power Doesn’t Always Win: Remembering the FTAA
In Latin America the governments of Bolivia, Ecuador and Venezuela have now withdrawn from the World Bank’s International Center for the Settlement of Investment Disputes (ICSID), the most commonly used investment arbitration tribunal.

The Ecuadorian government has also begun a citizen’s audit of its trade and investment agreements with a view to reducing its exposure to the system.

Further changes are under way

Meanwhile policy changes and reviews are underway in a number of other countries. In South Africa, following an audit of its investment agreements, the government has begun to cancel its treaties with several European countries.

And in Australia, the previous Labor government had refused to accept the inclusion of the investor-state dispute settlement provisions in the TPP after tobacco giant Philip Morris attacked its public health laws on tobacco control using the system – though the position of the new right-wing government has been less clear on the issue however.

Reviews of policy are also now being undertaken in India and Argentina.

The dangers are very real

The powers granted to corporations in these trade and investment agreements constitute a straitjacket on some of our most important environmental regulations and responsibilities.

As previous campaigns have shown us, working together we have a good chance of not only preventing that straitjacket being applied more widely, but of actually loosening its current constraints.

In order to do that, environmental activists worldwide need to understand that behind the technical jargon of ‘arbitration tribunals’ and ‘investor-state dispute settlement’ lies a very real danger.

A wake up call

The leaked environmental chapter has provided a wake-up call to environmentalists regarding the dangers of the TPP.

Combine this with the ways in which corporations will be able to undermine existing environmental laws using the investment chapter, and we should be left in no doubt as to what’s at risk in the deal.

For more information take a look at the Democracy Center’s recent report ‘Unfair, Unsustainable, and Under the Radar: How Corporations use Global Investment Rules to Undermine A Sustainable Future’