The Trans-Atlantic Trade and Investment Partnership (TTIP) is a massive trade agreement, that, if approved, would become the world’s biggest ever trade and investment deal. With people becoming increasingly concerned about the direct economic, social and environmental impacts that dull-sounding ‘trade agreements’ can have on their lives, growing public awareness has pushed the European Commission to engage in a public consultation on one aspect of the deal.

The consultation has been called largely to assuage growing pressure from civil society groups concerned about the rights being granted to corporations under the guise of ‘investor protections’, and the system of private tribunals – the investor-state dispute settlement (ISDS) mechanism – that allows corporations to sue governments when they feel that these rights have been breached by a government policy or court decision.

At the Democracy Center we recently received a communication from a member of the European Parliament (MEP) regarding the ISDS mechanism and its possible inclusion in the TTIP. One of the questions raised by the MEP focused on whether or not “the investor-state dispute mechanism is commonplace within international trade agreements.” It is great to see elected representatives taking up this issue, especially when it comes after pressure from their constituents, as it did in this case. In our briefing we gave an overview of the growing discontent with ISDS around the world and we pointed out, as I will in detail in this article, that the widespread appearance of ISDS clauses in previous trade and investment agreements is certainly no reason not to challenge their inclusion in new ones.

This focus on how commonplace ISDS is in existing trade and investment agreements – a fact often employed as a basis for its supposed legitimacy – is not an accident. Several commentators and interest groups have been advocating for the inclusion of ISDS in the TTIP using this argument.

Ken Clarke told Guardian readers that: “These clauses are routine in modern agreements, giving quick protection to an investor being cheated by a government breaking its treaty obligations.” Business Europe, the continent’s leading business lobby group, tells its readers that “ISDS… is a practice that States traditionally follow for many decades, a routine ingredient of international economic diplomacy.”

ISDS is all very routine. It’s standard practice. Nothing to worry about.

But what Ken Clarke and others conveniently ignore is the growing rejection of this system of corporate rights and private tribunals all over the world, not just by campaigners and NGOs, but also by economists, legal experts – and governments themselves, who are only coming to appreciate the negative consequences of accepting these ‘standard’ clauses after the fact.

In South Africa, the government has recently moved to terminate its investment treaties that include ISDS because its review found that they “pose risks and limitations on the ability of the government to pursue its constitutionally-based transformation agenda” and “growing risks to policymaking in the public interest”.

It was speaking from experience. In 2007, Italian investors Piero Foresti sued South Africa in relation to its Black Economic Empowerment Act that aims to redress some of the injustices of the apartheid regime.

On 17th March last, the government of Indonesia announced the cancellation of its bilateral investment treaty (BIT) with the Netherlands and its intention to review all of its other existing BITs that expose the country to the ISDS system. The decision is also based on hard experience. Indonesia is currently being sued for US$1.05bn by British-registered mining corporation Churchill Mining. Churchill brought the case after it’s local partner, the Ridlatama Group, had its coal mining permits revoked amidst accusations of illegal logging in a conservation area and the forgery of mining licenses. Susilo Bambang Yudhoyono, Indonesia’s president, spoke out against multinational companies wanting to “pressure developing countries like Indonesia”.

Open DemocracyWho really wins more ISDS cases - governments or corporations?
In Europe, it’s not a coincidence that the German government has been one of the first to come out against the inclusion of ISDS in the TTIP. Germany is being sued for $3.7bn by the Vattenfall energy corporation because of its decision to phase out nuclear power following the Fukushima disaster and a long campaign by environmentalists. The Energy Charter that allowed the corporation to use ISDS to sue Germany has been legally binding since 1998, but only now has its full potential as a corporate mode of attack become clear. (We should note that this move is a self-interested one exclusively aimed at protecting Germany from future lawsuits by US investors. Taking away ISDS as an option for US corporations active in Germany while keeping it for German corporations overseas is a clear case of double standards).

The system is no stranger to double standards. With ISDS, only foreign corporations can bring cases, giving them a very powerful bargaining chip not available to domestic firms. And there is no corresponding mechanism that allows governments to hold corporations accountable when they breach labour or environmental regulations. It’s all one-way traffic.

Some of the most blatant examples of corporations using ISDS as a way of flexing muscle and putting pressure on governments relate to public health policy initiatives. Tobacco giant Philip Morris is currently suing the governments of both Australia and Uruguay for billions of dollars for introducing regulations aimed at reducing smoking. Whatever the eventual outcomes, the short-term effect of these cases will be to delay similar initiatives in other countries for fear of more legal cases. This ‘freezing effect’ on public interest policymaking is one of the most pernicious effects of the system. How many people will die from smoking related illnesses while governments delay stricter tobacco control measures for fear of corporate lawsuits?

Meanwhile, for some developing countries the costs of defending a case -$8million on average – are so prohibitively high (rulings rarely grant costs to defendants, even when they are successful) that this also acts as a disincentive to introduce public polices that might affect corporate interests. These governments, under constant pressure to appear more attractive to foreign investors, are left with their hands tied by the ISDS system when it comes to conflicts of interest between corporate profit and sustainable development initiatives.

The stance of the new Australian government on ISDS (the previous government had rejected ISDS outright) and other voices of dissent in Asia such as the Malaysian government, will have major implications for the other big regional trade and investment agreement currently being pushed by the US, the Trans-Pacific Partnership (TPP – not to be confused with the TTIP…)

When the proposed investment chapter of the TPP was leaked in 2012, one hundred legal experts from the countries involved wrote an open letter to negotiators expressing concern that the investor protections and their enforcement through ISDS “threatens to undermine the justice systems in our various countries and fundamentally shift the balance of power between investors, states and other affected parties in a manner that undermines fair resolution of legal disputes.”

In the US, state legislators have written this open letter to negotiators of the TPP urging them to reject ISDS because “it interferes with our capacity and responsibility as state legislators to enact and enforce fair, nondiscriminatory rules that protect the public health, safety and welfare, assure worker health and safety, and protect the environment. It should have no place in the Trans-Pacific Partnership.” In August 2010 dozens of legal professors signed this public statement published by the Osgood Law School expressing their concern that the current international investment regime “hampers the ability of governments to act for their people in response to the concerns of human development and environmental sustainability.”

Despite this growing opposition, the expansion of the current investment rules regime, with some minor adjustments, is being proposed under both the TPP and TTIP. This would mean leaving many more governments vulnerable to corporate lawsuits (or simply the threat thereof) in the future. It would be akin to drawing water from a well we already know to be poisoned.

The debate is far from over in Europe, however. With the most recent figuresfrom the United Nations Conference on Trade and Development showing that almost half of new ISDS cases in 2013 were filed against developed countries – most of these against EU member states – the time is right to pressure other EU governments into following Germany’s lead. It seems that chickens are coming home to roost with regard to corporate lawsuits in Europe.

Among governments with first-hand experience of these corporate attacks in other parts of the world, dissent continues to grow. In Latin America, several governments have withdrawn from the main arbitration tribunal, the World Bank’s International Center for the Settlement of Investment Disputes (ICSID), and Ecuador has begun a citizen’s audit of its investment treaties with a view to reducing its exposure to the system. The Brazilian government, the highest recipient of inward investment in Latin America, does not include ISDS in its trade and investment agreements. Likewise the Indian government, having faced several attacks on public policy by corporate investors, announced in 2012 that it would renegotiate its free trade agreements and abolish ISDS.

The trade and investment treaties entered into by the previous governments in all of these countries – often under pressure from international financial institutions – contained these “routine” ISDS clauses. But it has only been in recent years – when they were hit by crippling corporate lawsuits – that the implications for democracy and policymaking in the public interest became clear. 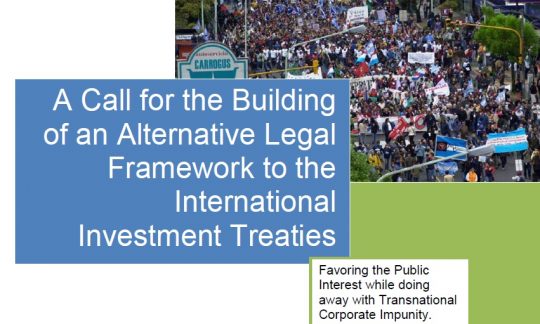 Bilaterals.orgStrategy Conversations: From Protest to Proposal
These deals were signed in the hope of attracting investment and creating jobs (although there is no conclusive evidence that signing investment treaties with ISDS in itself leads to increased foreign direct investment), and the ISDS clause was supposed to be a weapon of last resort for investors in the case of expropriations or other such conflicts. In recent years, however, the (ab)use of ISDS has exploded. It has become an increasingly-employed weapon of choice for corporations and their aggressively litigious law firms in disputes over issues from public health to natural resource management to financial policy.

In this article endorsing the move by South Africa to abandon ISDS, Nobel Prize winning economist Joseph Stiglitz describes the real goal of those supporting these investment agreements as being “to restrict governments’ ability to regulate and tax corporations – that is, to restrict their ability to impose responsibilities, not just uphold rights. Corporations are attempting to achieve by stealth – through secretly negotiated trade agreements – what they could not attain in an open political process.” (Stiglitz also outlines alternative methods for guaranteeing investments in countries like South Africa if investors are not happy with the country’s constitutional protection for property rights.)

As we informed our MEP friend, ISDS is commonplace in existing trade and investment agreements. But this is just part of the story. All over the world the current investment rules regime, with ISDS at its centre, is being increasingly scrutinized and rejected.

The consultation launched in Europe has already come in for severe criticismfrom civil society groups because it does not allow space for a conversation about the structural problems with the current investment rules regime, but instead is limited to the narrow reform agenda of the EU Commission. The current high profile of this issue in Europe remains an important opportunity nonetheless. It is a chance for civil society groups and others to broaden the debate on investor rights and ISDS to look at some of the basic questions of how best to balance the protection of investments with the realization of human rights and the expansion of democracy. With both the TTIP and TPP under consideration as you read this, now is the time for us to insist on having this conversation.