ConocoPhillips didn’t become the 13th largest oil and gas company in the world with annual profits in the billions by carefully adhering to social and environmental regulations. According to their website, they are “the world’s largest independent exploration and production company based on production and proved reserves,” with operations in 17 countries and $73 billion of total assets.

There are a series of externalized costs to their size and profits – aside from human-induced climate change. They don’t have a good safety record for their workers or the environment, with over $266 million in payouts through the courts due to environmental and safety infractions since 2000 – and those are just the ones that were reported and won in prosecution.

Even though this information is readily available online, that did not stop their corporate reps from trying to convince locals in San Martín César, northern Colombia, that they would carry out fracking ‘responsibly and safely’. The municipality of San Martín is ConocoPhillips’ latest target for fracking, ever since 2015 when the multinational signed a contract with Colombia’s National Hydrocarbon Agency that named them as majority operator of the VVM-3 block (20% is held by CNE Oil & Gas), which covers more than 33,000 hectares over two provinces.

On September 27, 2017, ConocoPhillips held a socialización, a type of town-hall meeting, in a hotel in San Martín. I was present at the invite of local organization CORDATEC (the Corporation in Defense of Water, Territory and Ecosystems). The town hall meeting is a requirement for ConocoPhillips to apply for an environmental license for unconventional fossil fuel exploration (they currently hold a license for conventional only). It’s obvious that their reps would not have bothered to spend all day in that cold air conditioned room with us if they didn’t have to for their license application.

Resisting the threat of fracking in Colombia

When ConocoPhillips’ staff began handing out plates of food, I followed the lead of local activists and said no. The rule is, don’t accept their gifts. We didn’t sign the attendance sheet either – we didn’t want to support them in their license application any more than we had to. Unfortunately, just our presence was enough to help them go through the motions of their license requirement.

This was quite a frustrating dynamic for local activists who didn’t want to miss out on the chance to go head-to-head with the corporation and voice their disagreement with the project. But we were also acutely aware that just by being there we were legitimizing a supposed process of ‘consultation’ with the community, and therefore were unintentionally contributing to the corporation’s license application. Even with tactics like not signing the attendance sheet, ConocoPhillips’ photos and videos of the day would be more than enough to prove that there were locals in attendance.

While the corporate reps were at times struggling for words at some of the questions and strong statements put to them by members of CORDATEC, the massive power differential was clear. ConocoPhillips were completing a formality – they were not asking for feedback on locals’ concerns in order to take them into account. Though it was obvious that they did not expect to meet with such an informed opposition.

This empty formality seemed almost state-sanctioned. There was a representative from the national licensing agency (ANLA) present, Laura Torres. I presume she was there to make sure the town hall meeting took place in her role as employee of the licensing agency. But if I hadn’t known who she was, I would have thought that she was a ConocoPhillips employee, given the condescending tone she used towards locals as she attempted to reassure them that the license application process is all above board, in the face of questions about alleged irregularities.

Much of the day was spent listening to ConocoPhillips staff dominate the meeting, above all a particular engineer, Andres Rojas, who did his best to convince the people of San Martín that fracking is a good thing. It’s so well documented that fracking contaminates the environment, from testimonies from those who live near it and from scientists, that listening to the ConocoPhillips reps claim that fracking can exist in harmony with the environment nearly made me laugh. What stopped me was how convincing they actually sounded. The myths surrounding fracking have a lot of money and power and a huge PR machine behind them. And by telling people we cannot live without fossil fuels, they also tap into people’s fears of some kind of return to past history of living in poverty.

Our friends from CORDATEC were not impressed by the corporate spin. Local activist Carlos Andres Santiago pointed out, “If fracking is so great, if it brings so many benefits, and it doesn’t contaminate, and we’re the ones who are being alarmists and lying [about the negative impacts], then how come in Australia five out of seven states have banned it? Why is it that a month ago in Ireland the President signed into law the banning of fracking? Why is it that Germany and France are moving towards banning fracking?” 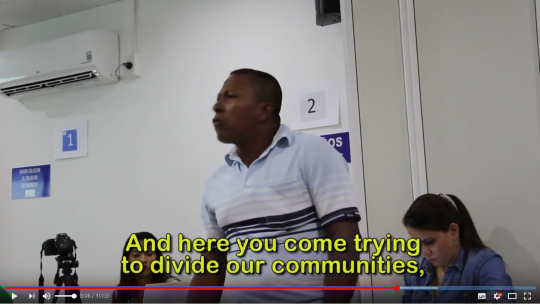 Indeed, as an Irish anti-fracking activist, I could relate to this statement. Years of grassroots campaigning in Ireland, driven by valid concerns about the environmental and health impacts of fracking, led to its banning in 2017. It was a slow build of power towards achieving that ban. Getting state democratic mechanisms to work in favor of the grassroots takes years of work. In Colombia, activists are on the path of building that power.

Unfortunately, they also face an uphill battle precisely because of the fracking bans taking place in more industrialized countries like Ireland, as multinationals like ConocoPhillips are then more likely to look towards countries that may have weaker environmental policies, like Colombia (The CEO of BP said a few years ago that if they fracked in the UK they would attract “the wrong kind of attention”.) They also face the challenge of these policies becoming even weaker due to pressure from multinationals and other powerful players. While this story repeats itself the world over in rich and impoverished countries alike, it can be starker and more challenging in contexts such as Colombia that have a history of providing raw materials for export to richer countries, a dynamic that did not end when colonization ended.

They may face difficult odds, but at the time of writing, local activists are organizing to hold a popular consultation – a constitutional mechanism in Colombia that allows municipalities to hold referenda on land use. Nine municipalities in the country have already used the mechanism to ban mining and fossil fuel extraction in their territories. If the majority of the local population in San Martin votes against fracking, the local municipality could be forced to ban it.

Unfortunately, while popular consultations are a powerful tool (seemingly unique to Colombia) that communities are using to their advantage to stop destructive mining and fossil fuel extraction, there are legal processes currently ongoing – pushed by a mining company – which could see the popular consultations become legally toothless. Laws and policies can be manipulated according to what the most powerful actors desire. The government bending to the will of mining and fossil fuel corporations is a recurring dynamic in Colombia.

While activists in San Martín are building grassroots power towards stopping fracking (regardless of whether the popular consultation goes ahead or not) the massive power of ConocoPhillips – and their allies within the state – are formidable opponents. One of the most significant milestones of San Martin’s anti-fracking campaign was the large protests in 2016 to stop machinery from accessing a test site – but locals have paid a high price in the form of stigmatization, police brutality and criminalization, and even death (though it’s very hard to prove the corporation could be behind the suspicious deaths of local activists). San Martin has already seen a lot of violence from paramilitary groups in the worst years of Colombia’s conflict, and for the government now to turn the state’s anti-riot police forces against anti-fracking protests in San Martin is a shocking betrayal for locals.

The kinds of corporate tactics used to push fracking I saw at the town hall meeting are the same ones I saw at play in Ireland – regurgitating myths about the supposed safety and benefits of fracking, and trying to manipulate and divide communities with sweet talk and gifts. These tactics are seen the world over and, given the unequal power dynamics at play between corporations who have huge influence over governments, and communities derided as “anti-development” if they question these damaging projects, they can work. Corporations also try to use their might to forge ahead no matter what – ConocoPhillips has begun testing at their exploration well, amid denouncements of water contamination.

But in San Martin most people are not fooled, and have already caused a big headache for ConocoPhillips. As Dorys Stella Gutierrez, President of CORDATEC, said: “One thing we are certain of here is that the best place in the world is San Martín Cesar. And they want us to be guinea pigs, they want to practice on us. Losing our land is not worth a handful of coins. The government thinks money is more important than us human beings here in San Martín.” If locals can manage to call out and challenge the state complicity behind the project, and continue to build local power in community organizing – whether that is through a popular consultation or not – they may well be able to send ConocoPhillips and their unwanted ‘gifts’ packing.