On the 28th of June, 2017, the Republic of Ireland officially became the fourth European country to ban fracking after France, Germany and Bulgaria. This win was followed up, some four months later, by Scotland indefinitely extending its existing moratorium on the technology. 2017 has also seen the State of Maryland join New York and Vermont in outlawing fracking in the US.

Although community resistance in the North has taken some blows to the fracking industry locally and nationally, the development of infrastructure to facilitate international imports of Liquified Natural Gas (LNG) from shale and other sources continues to be the linchpin of international energy policy in both the US and the EU. In recognition of this, some movements – not only from Ireland but across Europe and North America – are broadening the struggle beyond the local, rallying around cries of “not here, not anywhere”. 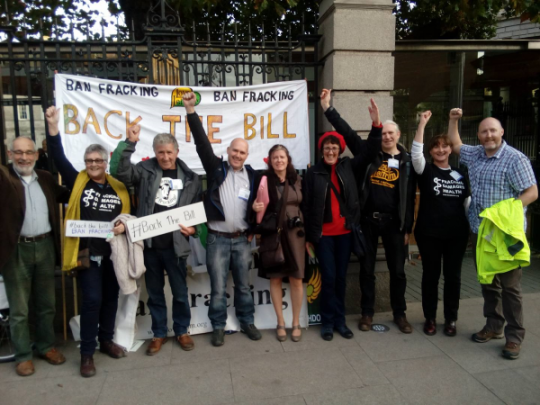 How Ireland Banned Fracking - The Importance of Connecting Across Struggles

This thinkpiece seeks to provoke discussion within Northern movements on concepts of international solidarity. Rather than prescribing “one-size fits all” solutions, we include reflections from other contexts in the battle against fossil fuel development that may serve to provoke necessary discussion on privilege and solidarity.

Renowned environmental activist and author Naomi Klein helped popularize the slogan “not here, not anywhere” after connecting with activists in the run up to the COP21 in Paris. The slogan appears to have been coined by activists in France (“ni ici, ni ailleurs”), but has since gained currency within Northern movements. It is a phrase that has given voice to a movement that is focused not only on localized drilling sites, but on the broader infrastructure that connects fossil fuels to markets internationally.

Indeed fracking itself cannot be viewed in isolation as a technical issue, but rather as part of a broader power grab by vested interests. Shale gas represents one of a number of  “extreme energy” frontiers that, according to Klein, is now affecting “historically privileged populations”. Indeed, many OECD countries have rushed to emulate the “success” of the United States’ shale gas revolution in a bid to “reverse” the declines in production that are consistent with hitting peak oil and gas. Both the Trump administration and the EU are bulldozing ahead with ambitious plans to expand fossil fuel operations through the construction of Liquified Natural Gas (LNG) terminals and pipeline projects. For example. the European Commission, in collaboration with member States, has recently released their latest list of “energy projects of common interest” – of which a whopping 77 are related to expanding natural gas infrastructure. Such projects would lock the world into further fossil fuel consumption; flying in the face of the EU’s stated aims of keeping global average temperatures below an already catastrophic 2°C rise.

Northern communities are indeed now finding themselves more often on the frontlines of struggles against extractive projects – something that communities across Africa, Asia and Latin America have been experiencing for hundreds of years. But there is a danger that referring to “historically privileged populations” in the global North obscures what continue to be stark and dangerous differences in how these projects and the resistance to them plays out – differences which in the global South regularly cost lives.

France provides an interesting case study. Francois Hollande officially banned fracking within the mainland in 2013. While activists in France say “ni ici, ni ailleurs”, French business are responding with “if not here, elsewhere”. French oil major, Total, continues to chase fracked gas in former colony, Algeria, as well as in the Mapuche territory of Neuquen in Argentina. The racist and colonial reality of this double-standard cannot be overlooked. Commenting at an ‘Decolonizing Energy’ event in the UK this October, Co-founder of the Algerian Solidarity Campaign, Hamza Hamouchene said, “To stop fracking, we have to be internationalist and recognise the reality of imperial plunder and racism”.

Rather than an exception, such neocolonial behaviour confirms the rule; one that relies upon racism, sexism and other forms of oppression so as to politically and economically benefit an elite minority. Further to the projects being rolled out within OECD countries, the EU and the Trump administration are both actively pushing a shale gas agenda in Latin America. The Euro-Latin American Parliamentary (EuroLat) represents just one arm in a furthering of both US and European fracking interests in Latin America.

Chat about the Scottish moratorium 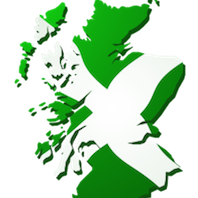 Interview with Callum McLeod, Our Forth, Scotland

The continued dash for Latin American resources at the hands of powerful elites can be traced back as far as the arrival of Columbus. In the wake of the 2008 financial crash, many European corporations looked to Latin America to recover “investor confidence”. In other words, there has been a clear move by multinational extractive industries to target cheap oil and gas and labour in global South countries, where regulation is also more lax – and community resistance carries far greater risk. Foreign Direct Investment (FDI) in Latin America via Spanish multinationals alone surged from €45 billion in 2007 to €116 billion the following year. With some local and national governments (at least partially) shutting the door on fracking in the North, could we expect to see a reinforcing of these historical patterns of domination and exploitation in relation to unconventional gas extraction, where rich countries extract natural resources from impoverished countries, at great human cost?

These patterns are about whose communities are targeted for extraction and exploitation. They are also about who faces the most danger and repression for resisting unwanted projects. British NGO, Global Witness, has been sounding the alarm internationally on the increasing violent repression of environmental and human rights defenders in many countries across the Global South. Their latest report, ‘Defenders of the Earth’, reveals how 2016 broke a consecutive record when 200 protectors were killed for standing up against extractivist projects.

Criminalisation of protest against extractive projects in Peru 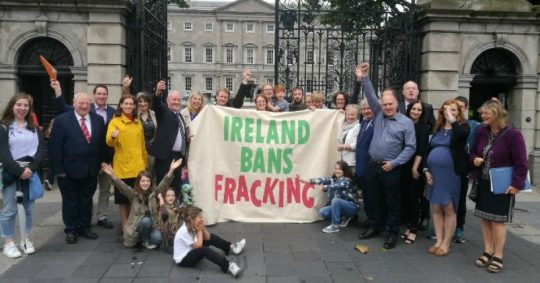 In Colombia, 37 killings of environmental protectors were reported in 2016, making it the second most dangerous place to be a defender in the world that year. In recent years, the Colombian government has started granting licences to corporations such as Drummond, Exxon Mobil and Conoco Phillips (US) to frack for gas. Already this year alone, three community members from San Martin, where Conoco Phillips plans to operate, have been killed – possibly in relation to defending against the industry – with many others receiving threats. In Argentina, the Mapuche indigenous community have been brutally criminalized for protecting their lands and water from the likes of Exxon Mobil and Total. In 2015 Mapuche woman, Relmu Ñamku, was sentenced with attempted murder after a police officer was hit with a stone as forces attempted to break up a community-held blockade. These charges, which were later dropped owing to international pressure, formed part of Argentina’s anti-terrorism law.

When compared with campaigns in the North, the stakes for those who stand up against fracking in the South couldn’t be higher. This reality must be recognized internationally with steps taken to ensure that bans against fracking won in Europe and North America do not unintentionally place a greater burden on already oppressed and marginalized communities in Latin America and other parts of the Global South. One important step for Northern campaigners can be in recognizing the international dynamics of power at play and exploring, specific to each context, how activists can leverage their privileges in solidarity with defenders in the South.

Given the varying circumstances, rather than offering any prescriptions for action, we invite those within those movements who continue to push for a world without fracking to actively investigate these questions.

Some relevant resources to start with:

Systemic injustice is at the heart of the climate crisis; determining who will be hit hardest and fastest by the impacts – from fossil fuel extraction, to local pollution, to the flood and droughts caused by temperature rise. Climate change itself is also a symptom of global injustice – fuelled by political and economic systems which prioritise some lives over others.

If we truly want to build the mass movement we need to take on the climate crisis, we need to address the root causes of climate change – economic injustice, white supremacy and Western colonial attitudes – both within our movement, and in the wider world around us. We also need take leadership from the people on the frontlines, and work to find climate solutions based in justice.

How as a divestment movement can we work to further these goals, and not to replicate the injustices we see in the wider world within our movements?

This web workshop will explore what we mean by ‘decolonisation’, how it relates to the divestment movement and offer some examples, reflections and prompts to develop our practice.

(2016) Energy Colonialism: The EU’s Gas Grab in Algeria, The Observatory on Debt and Globalization (ODG)

During the first five months of 2015, Algeria witnessed an anti-fracking uprising. The people of the Algerian oil and gas-rich Sahara, in their tens of thousands, rose against the authorities and multinationals’ plans to frack for shale gas in the country. This uprising needs to be situated in its correct context, a context of political and economic exclusion; and the plundering of resources to the benefit of a corrupt elite and the predatory multinationals, ready to sacrifice human rights and whole ecosystems in order to accumulate profits.

This report argues that the EU External Energy Policy is prioritising corporate fossil fuel interests and a locking-in of Algerian gas over human rights and people’s sovereignty.

We want to bring you the “Extreme newsletter: New frontiers of energy extractivism in Latin America”, which gathers articles published between September and December 2016 on the website of Oilwatch Latin America. It tries to put into dialogue different approaches to extreme energy, to contribute to critiques of fossil civilization and to reaffirm the urgency of building alternatives.

Some reflections on racism reproduced within Northern movements:

(2015) “Wretched of the Earth” Bloc at UK March: Darkening the White Heart of the Climate Movement, Black Dissidents

At London’s (2015) climate march, the ‘Wretched of the Earth’ bloc, representing communities of colour on the frontlines of climate change, were supposed to lead. At the last minute, the march’s organizers changed their minds.

“Not here, not anywhere”: Questions for fracking movements in the Global North
Download as PDF