Máxima Acuña, a farmer from Peru’s northern highlands, recently won the 2016 Goldman Environmental Prize for her resistance against the mining consortium Yanacocha in Cajamarca, Peru.

At the prize acceptance ceremony in San Francisco on 18 April, in lieu of a speech Máxima sang her story: ‘Because I defend my lakes, they want to take my life.’

Yanacocha is the largest gold mine in Latin America and fourth largest in the world, operating since 1993. The mine is now owned by the USNewmont Mining Corporation, a Peruvian mining company, and the World Bank’s International Finance Corporation.

Gold mining causes ‘toxic mine drainage’ – when you break up rock that’s been underground for a long time chemical reactions cause it to release toxic metals and acids. And at Yanacocha cyanide-laced water is usedto separate the gold from the rock.

Locals have been complaining for years of contaminated water and the disappearance of fish in the rivers, lakes and streams. Reinhard Seifert, an environmental engineer who spent years investigating the effects of the Yanacocha mine on the area’s water quality found traces of lead, arsenic, cyanide and mercury in the drinking water, linked to the rising rates of gastrointestinal cancer amongst residents of Cajamarca.

One Woman’s Story of Resistance

In 2011, Yanacocha bought up lands in Cajamarca in order to expand their operations into a new mine, Conga. Yanacocha claims legal ownership of Máxima’s land while Máxima says she never sold any of her land to the company, and the land deeds bear her name.

Quoted in these pages in 2012, Máxima said: ‘I may be poor. I may be illiterate, but I know that our mountain lakes are our real treasure… Are we expected to sacrifice our water and our land so that the Yanacocha people can take gold back to their country? Are we supposed to sit quietly and just let them poison our land and water?’

The Conga mine had plans to dry up five lakes, including the one that Máxima’s land borders. It became the highest profile environmental conflict in Peru amongst an estimated 200 such conflicts in 2012, with several deaths of defenders at the hands of the police.

In 2012, Yanacocha sued Máxima and her family for alleged illegal occupation of their own land, and the court ruled in Yanacocha’s favour. The judge sentenced four members of the family to suspended jail sentences, which were then overturned in December 2014 with a verdict that saw Máxima victorious against Yanacocha’s claim to her land.

The family had already suffered numerous eviction attempts and physical violence on their property, and after the 2014 verdict things intensified. On 3 February 2015, agents from the Peruvian police special operations division and private security forces destroyed parts of Máxima’s house that were undergoing construction. One year later, and the family was still suffering intimidation: on 5 February 2016 Máxima’s home was again stormed by security forces, this time to destroy her crop of potatoes.

But since then, the company has said ‘We do not anticipate development of Conga for the foreseeable future,’ a statement which has been hailed as a victory for Máxima and those who are resisting Conga.

What Does Extractivism Mean In Latin America?

Sadly, this story is not unique to Cajamarca. Mining for minerals such as gold, silver and copper is common across the continent – Latin America consistently tops the global list for mining exploration, and in 2014 had one of the largest shares of total global exploration budget, at over 26 per cent. Fossil fuel extraction shows a similar picture. In 2011, the Latin American Energy Organization released figures that placed Latin America as the region with the second largest oil reserves after the Middle East, with 20 per cent of global reserves.

This kind of mining and fossil fuel exploitation is referred to as extractivism in Latin American contexts. It is the base of many Latin American neoliberal economies such as in Peru and Colombia. In countries like Ecuador and Bolivia, it’s referred to as neo-extractivism – when government taxes from extractive activities are invested into health and education programs.

But the meaning of extractivism is not just about extraction: it is also about the conditions under which extraction takes place, and in whose interests. In Latin America, the conditions are often situated within a rural and/or indigenous context. This means communities in these areas live principally off the land and are subject to the forces of nature to access water and grow crops, forces of nature that become distorted by extractive activities and ever more sharpened by climate change impacts.

Why Does Extractivism Affect Women More?

Because of socially assigned gender roles, women are often the principal caregivers of the family – responsible for growing or providing food – in the kinds of community contexts where extractivism usually takes place. And so when water is contaminated and/or scarcer, women feel the negative impacts more. The declaration from the 2014 Gathering of Women against Extractivism and Climate Change in Ecuador said that ‘the impacts of extractive activities alter the cycle of the reproduction of life, whose regeneration falls on the shoulders of women.’ The altering of natural cycles, such as the contamination of water near the Yanacocha mine, manifests as more work in women’s lives.

The impacts of extractivism on women not only include an increased burden to the work women do to provide food and water to their families, but permeate deep into the social fabric of communities. At the gathering on extractivism in Ecuador, women gave testimonies: ‘When the mining and fossil fuel companies come to our territories they cause huge problems, they break the social weave and replace it with conflict in families, division in the communities, and confrontation between us.’

In these situations, the gendered divisions of labour show up in starker relief as men take on jobs in the industry. The local economy now revolves more around the masculinized wage labour in the mine and reduces importance of the shared economy of caring for the practical and emotional needs of the community. The existing gender divide of labour creates power imbalances, worsened by extractivism: as ‘women’s work’ mostly goes unpaid, the waged work in the mine that men can access lends increased power to men’s voices in the community (though they also suffer from extractivism in a dangerous, unhealthy, exploitative workplace). 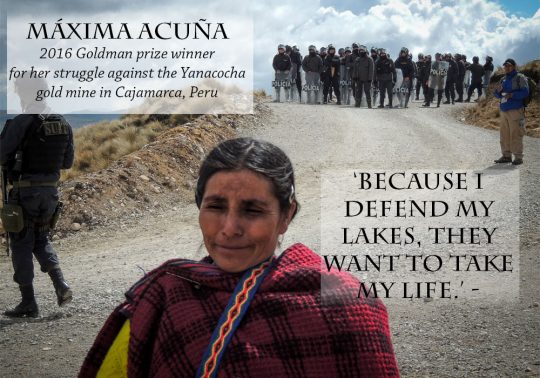 Maxima Acuña under attack for her resistance against mining in Peru

Extractivism breaks the social fabric of communities in other, more violent, ways. As respected Uruguayan environmental analyst Eduardo Gudynas writes: ‘There is no such thing as neutral or inoffensive extractivism…Violence is always present in one way or another, ending up affecting above all the weakest, the local communities, especially campesino small farmers and indigenous groups.’

The violence permeates the entire community, but affects women particularly because of gender-based violence. Melissa Wong Oveido, a representative of the Latin American Union of Women (ULAM, a regional network of women affected by extractive activities and policies), quoted in El País said:

‘In Latin America psychological, physical and environmental violence against indigenous, rural and Afro-descendent women on the part of extractive industries is on the rise. Women are dispossessed of their lands; they are victims of sexual abuse and trafficking.’

Rising Up In Resistance

With the upswing in extractive projects in Latin America and its negative impacts on local communities there’s been a corresponding rise in socio-environmental conflict on the continent. Resisting extractive projects is a dangerous business, and more land and environmental defenders died in 2014 in Latin America than anywhere else in the world, with 88 out of 114 total recorded deaths.

More and more women are joining and leading resistance movements: and as women, this comes with certain risks linked to their gender. In a comprehensive 2015 report (PDF) on criminalization of women environmental defenders in the Americas, the authors state that:

‘In all of the cases presented women suffered an attack linked to their gender: rape threats, public shaming linked to sex and sexuality, harassment of several types, and infamies against their honour. These attacks prevent women from developing their activism in surroundings favourable to the rights of people, of territory, and of nature.’

It might not be immediately apparent why the intimidation in Máxima’s case is particular to her being a woman. But when women resist extractivism, they become easier targets for retaliation by those in power. For example, they are less likely than men to have the resources to deal with court cases – as Máxima herself has said, she is illiterate. For a woman who doesn’t have the title deed to her land, as Máxima has, the outcome is likely to be dispossession. And much of the intimidation that Máxima has suffered focused on destruction to her home and crops – women’s traditional domain, and Máxima’s source of income.

Women feel negative impacts of extractivism more because of their roles as caregivers. But there are more subtleties at play here: why are women obliged to take care of the family, the home, the sick, and children? Similarly, why is the earth obliged to be a provider of ‘environmental services’; to give up its buried riches to profit transnationals? The logic of exploitation of women’s work and of the earth is the same: they are resources to be profited from. The struggles of women to free themselves from the cycle of unpaid labour as caregivers are linked to the struggles to protect the earth from desperate over-exploitation.

There is another subtlety. Extractivism is inherently violent, and tears not only at the earth but at the fabric of whole communities. Women already experience everyday gender-based violence, which is exacerbated by extractivism with impacts such as sexual harassment from migrant workers. But when women resist in their communities, the violence they already face increases: it is used as a tactic against them.

Máxima’s refusal to bow to the intimidation she faces because of her struggle only increased the violence against her. But she, like so many women, is not going to give up the fight. Máxima’s connection to her land underlies her decision to fight the corporation. As she said to El País: ‘I won’t be quiet. I know they’ll come after me and they’re going to disappear me. But on the land I was born and on the land I’ll die.’