As the process enters its 7th year of negotiations, TerraJusta continues to follow developments closely. We recently interviewed Raffaele Morgantini – Advocacy Officer at CETIM Center Europe-Tiers Monde and representative of the Global Campaign to Dismantle Corporate Power at the UN.  Below he gives us a general update on the Binding Treaty negotiations at the United Nations; outlines the biggest challenges regarding the negotiation process and the content of the Treaty; and explains what is expected to happen this year, including the plans for the Global Campaign, of which we are part.

Much of the power of transnational corporations is rooted in a worldwide network of trade and investment treaties that contain investor “protections” and binding enforcement mechanisms for the countries that sign up to them.  However, there are no equivalent binding international mechanisms of accountability for communities that suffer the negative human rights and environmental impacts of their operations. A Binding Treaty for Transnational Corporations on Human Rights is essential so that affected communities have a legal instrument that protects them and a way to access justice internationally.

TerraJusta: What is the current status of the Binding Treaty negotiations at the UN?

Raffaele Morgantini: Last October (2020) the 6th session of negotiations of the UN intergovernmental working group that is negotiating a Binding Treaty on Multinational Corporations and Human Rights took place.

On the one hand, we are at a critical moment in the process, but paradoxically, we also find ourselves at a point where negotiations have stabilized. In previous years we had observed attempts to attack, undermine and boycott this process, mainly by the private sector, representatives of transnational corporations, and also by some governments, in particular the European Union.  We are not currently seeing any more maneuvers aimed at undermining or slowing down the process. However, this does not mean that we are on our way to getting what we want in terms of content.

In our analysis, the attacks were stopped because of one key development, which was the change of government in Ecuador. Since Lenin Moreno’s presidency (2017), there has been a change of direction in Ecuador’s international processes. When Moreno got into power, a draft Treaty was presented at the negotiating table, the content of which is in line with the proposals and interests of the transnational corporate lobbies and their political allies.

In short, the process is alive, there are no major attacks to slow it down. But at the content level, there are still problems.

If we continue in this direction, we are moving towards the elaboration and future adoption of a Treaty, the content of which does not reflect the needs of the communities concerned. So it is possible to achieve a Treaty, but the question is What kind of Treaty?: A Treaty that accommodates the interests of transnationals and which will ultimately not serve to regulate their activities and sanction them when they violate human rights, is a “toothless”, “harmless” Treaty.

The content battle is still ongoing. It will continue and there is every chance that this process will go on for quite some time. That is the current situation, with a fairly marked polarization in terms of the positions of the different countries.

In broad brushstrokes, we can say that on the one hand there are the countries that have been advocating for years for the elaboration of an ambitious Treaty, with positions more or less aligned to those of the Campaign to Dismantle Corporate Power. It is worth noting the great support of part of the African continent, and in particular the role of countries such as Namibia, Southern Africa, Mozambique and others. In Latin America too, support is quite strong, with active and constructive participation from countries such as Panama, Cuba, Venezuela, Bolivia, Nicaragua, and now a growing interest on the part of Argentina and Mexico. In Asia we also have the support of a good number of countries. Then there is a group of countries in the middle, with sporadic participation and varied positions. And there is another very well-established group of countries that doesn’t oppose the elaboration of the Treaty – because now they have accepted it – but which nevertheless oppose the adoption of an ambitious Treaty. They want a Treaty that suits their interests and those of transnational corporations, a Treaty that does not serve to attack the power and impunity of corporations. They are the countries of the European Union, Japan, South Korea, New Zealand, Australia, Canada, USA, and some other countries that could be described as satellites, such as Brazil, Colombia, Chile, etc.

TJ: What does it mean to leave the Binding Treaty “toothless”?

RM: They are generally trying to change the whole point of that Treaty. In UN resolution 26/9, which creates the mandate for the working group, the objective of the Treaty is very clear: the regulation of the activities of transnational corporations. In its current form, the draft is no longer an instrument for regulating the activities of transnationals, but rather a general document summarizing States’ obligations on this subject, without strong rules or robust implementation and sanction mechanisms to attack the transnational architecture that allows for corporate impunity.

An important element is scope. As required by resolution 26/9, the Treaty must be focused on transnational investments and “other business activities”, knowing that these “other business activities” are of a transnational nature. That is, the Treaty should not focus on businesses registered in national laws or cover small and medium-sized enterprises,  or public companies that do not have transnational activities. That was the objective, but the European Union, the corporate sector and other countries have sought to change the scope to say, “No, this Treaty does not have to be about transnationals in particular, but about all companies.” And this for us was a strategy to dilute the process, remove the content and teeth of the Treaty.  A Treaty focused on transnational corporations, which are the largest source of human rights violations internationally, was sought, and not one focused on all types of business. Now we have a more general Treaty, that it will be very hard to make work, given the difficulty in dealing with all of the violations of all business activities around the world.

Another key element is that the current draft Treaty does not provide for direct obligations for transnationals, but only obligations for States. This is a problem, because we know that the obligations of States are not sufficient to hold transnationals responsible. In fact, there are transnationals that are much more rich and powerful than States themselves. Leaving all responsibility on the shoulders of States is insufficient, because in many States there is a lack of political will to regulate these entities, or there is simply a lack of technical and political capacity. In addition, we find that many States – particularly those most vulnerable or subject to neo-colonial relations, that dare to challenge the business interests of corporate power – are subject to blackmail, threats of withdrawal of investments, exclusion from trade, etc. Secondly, the activities of transnationals, which by definition are volatile and take place in several jurisdictions, allow these entities to escape the control of States. To this we must add the ability of companies to circumvent national jurisdictions, through complex legal and administrative structures, thanks to their considerable economic and political power.

I don’t mean that all of the current draft of the Treaty is bad. There are interesting things that can also be useful in our battles against corporate impunity. But overall, the Campaign is not satisfied with the current content of the draft, which departs from the objectives of the mandate and contains significant gaps. The Campaign will continue its battle to make the future Treaty a forceful Treaty, because when all things are considered, the current draft Treaty is not one that will allow affected communities to confront corporate power.

TJ: What is expected of the negotiations for this year and what plans does the Campaign have?

RM: This year we will enter the seventh session of negotiations, which will be in October 2021.

What the Global Campaign will do this year is to continue to struggle at the content level of the future draft, as well as advocacy and lobbying work at the State level for them to participate constructively and actively in the process. The support of States is important, because at the end of the day they are the ones that call the shots at the United Nations, which is an intergovernmental body where the political power of States is what counts. We, as representatives of civil society and social movements will be working to influence the States.

In this regard, as a Global Campaign, we will continue to develop advocacy work at the level of the UN diplomatic missions and at the level of national authorities. We will try to gain new support from new States, as well as strengthen the support of those already involved in the process, and if possible, reverse the position of some states that are not currently in favour of an ambitious Treaty.  In addition, we will prepare as a Campaign to participate in the next session of the working group in 2021.

TJ: Is there a limit to the negotiations to adopt the Treaty, or any foreseeable date?

RM: In the framework of this working group, the mandate itself, i.e. UN resolution 26/9, makes this clear: the process has to continue until a Treaty is reached. That’s the limit. Until States have agreed on an opportune time to formally adopt this legal instrument, there are no time limits to negotiations.

However, we hope that it will be developed as quickly as possible, because there is a need and urgency on the part of affected communities. But at the same time, we are unwilling to move towards adopting a Treaty that does not constitute a real shield against corporate impunity. We believe that adopting a Treaty with content that does not serve communities would be dangerous, in the sense that we will have a (bad) legal instrument on transnationals, and the discussion is over. So we need to strike a balance between the need to go fast – because affected communities need the Treaty – but at the same time making sure that the content of the Treaty is consistent and can really help communities on the ground. That’s what we are doing at the moment.

For more information about the UN Binding Treaty for Transnational Corporations on Human Rights, visit: https://www.stopcorporateimpunity.org/tratado-vinculante-proceso-en-la-onu/ 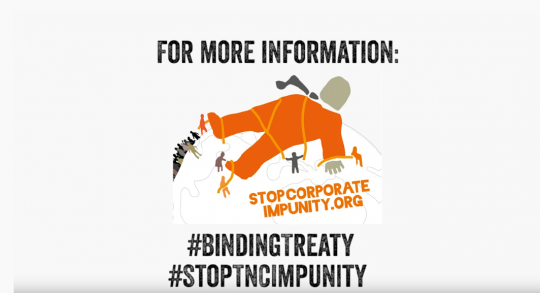