– On January 12th 2023 various allied social organizations which fight for the defense of Human Rights, life and territories in Peru released, in an initiative headed by Red Muqui, a ‘Statement to the International Human Rights Community: We denounce serious violations of Human Rights in Peru by the government of Dina Boluarte’. In the statement (translated into English below), organizations denounce the Human Rights violations resulting from the violent repression by Peru’s current government against the population. As international organizations that support the defense of Human Rights, life and territories, we express our deep solidarity with the Peruvian people for the brutal government repression they are suffering, and we firmly adhere to the statement launched on January 12th.

Statement in Spanish and list of Peruvian organizations that issued the statement at these links: Red Muqui-FB ; Red Muqui-Twitter

If your organization wants to adhere to the pronouncement, please register at this link LINK

1: On January 9th in Juliaca, Puno, another 17 Peruvian citizens were murdered. The Peruvian State, instead of protecting the fundamental right to life, has once again transgressed it. With the 6 deaths in Apurímac, 10 in Ayacucho, 2 in Arequipa, 3 in Junín and 3 in La Libertad, at least 41 Peruvians, including five minors, have been murdered in just over a month of President Dina Boluarte’s government.

2: In addition to this lethality by the Peruvian State there have been numerous serious civilian injuries and other police injuries. We are seeing people arbitrarily detained, extrajudicial executions, torture, cruel and inhumane treatment; as well as the search of homes, criminalization against social leaders, human rights institutions and Congressmen, plus interferences at the premises of political parties and social organizations. The presence of police officers dressed in civilian clothes (known as ternas  – government intelligence groups), who carry out arbitrary arrests, has also been denounced. All this takes place in the midst of a declared State of National Emergency.

3: President Dina Boluarte has reiterated that she “does not understand what the protesters are asking for.” Instead she accuses them of being inciters and terrorists, stigmatizing their claims. The demands of the Peruvian people protesting in the south and across the country as a whole, while they are diverse, are clear – and are born of indignation in the face of deep malaise and a questioning of the model of political and economic representation. The mobilizations coincide on 4 important points: the advancement of new general elections for 2023; the closure of Congress; a constituent assembly for a new Constitution; and now the RESIGNATION of President Dina Boluarte.

4: To the political myopia of the president, and the repressive denialism of the Premier (Alberto Otalora is President of the Council of Ministers of Peru) and the Council of Ministers exercised through the police and military forces, and as expressed on the night of January 9 from the Government Palace, can be added the implementation of a normative architecture that instrumentalizes criminal law with the aim of criminalizing the right to protest and freedom of expression, and limiting freedom of association. The Congress of the Republic and the Executive are both responsible for this – the manner in which they operate together having been confirmed once again by the vote of confidence granted to the Otarola cabinet, which is responsible for the human rights violations described in the previous paragraphs.

In this context of open violation of rights in our country, we turn to the international human rights community and the supranational bodies that seek to guarantee the validity of human rights and democracy to REQUEST their pronouncement and vigilance in safeguarding the fundamental rights of the Peruvian people who today exercise their right to protest. We request, in turn, that the international community exert its influence upon the Peruvian State to urgently and quickly create an independent Commission of Investigation to clarify the responsibility for the deaths of the 41 people, which unfortunately includes at least five minors.

List of Peruvian organizations that launched and signed the pronouncement:

List of international organizations that adhere to the pronouncement:

If your organization wants to adhere to the pronouncement, please register at this link LINK

Below, the Statement in Spanish and list of Peruvian organizations that signet it: 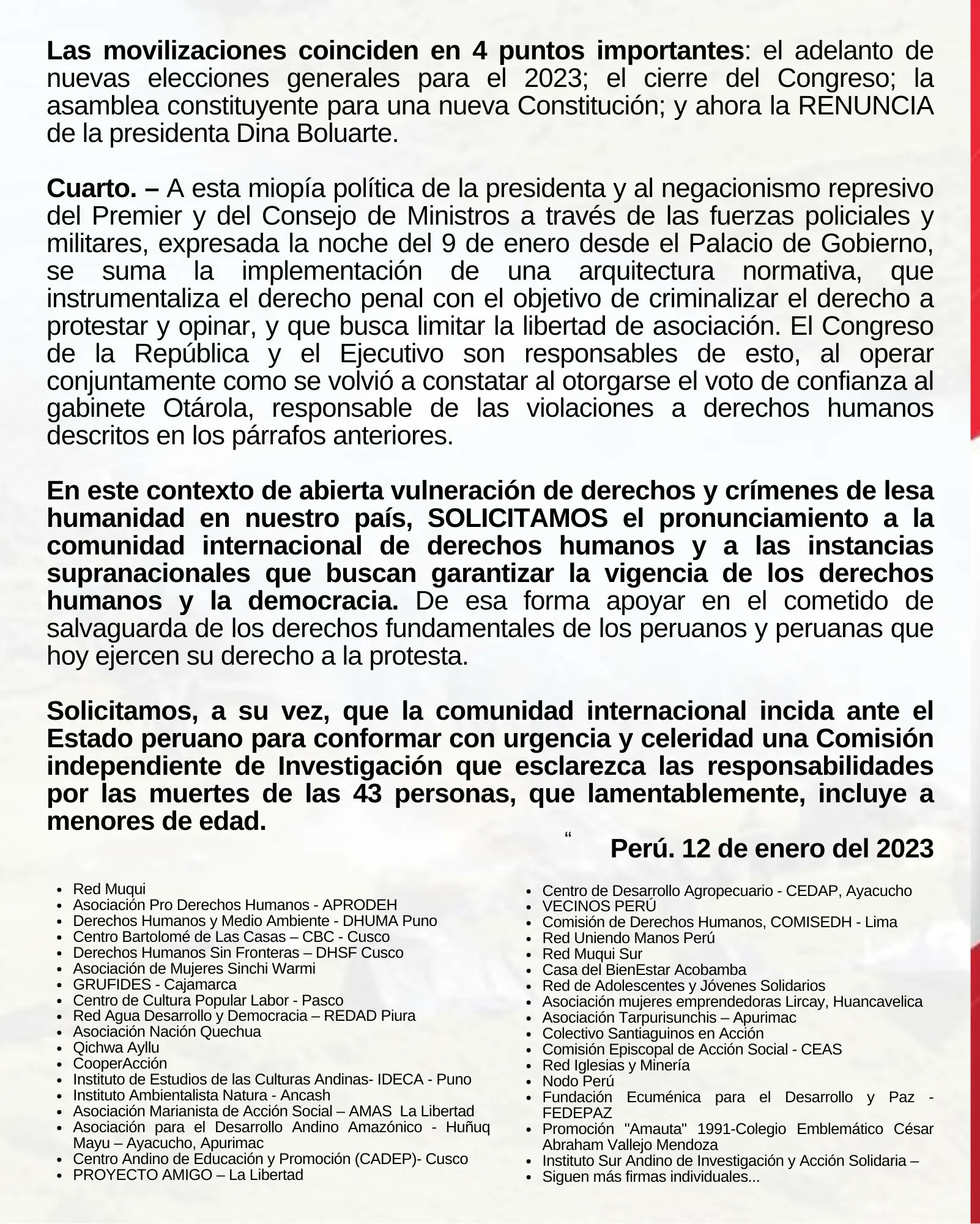