As a member of London Mining Network we have been working in alliance to draw attention to the activities of Anglo American Mining in May 2020, with the company holding its AGM behind closed doors on May 5th 2020.

Anglo American is one of the world’s biggest, wealthiest mining companies. Its Annual General Meeting (AGM, or annual shareholders’ meeting) was on 5th May 2020 – but held with only two people present, because of the UK government’s restrictions on gatherings of more than two people during the Covid19 pandemic.

With other members of London Mining Network we have put together the press release below. You can also find it in Spanish here.

Affected communities in Brazil, Colombia, Peru and Chile have a lot of awkward questions to put to Anglo American about the health, ecological, social and human rights impacts of their operations. In Brazil, where Bolsonaro’s government is violently repressing the rights of indigenous communities to deepen extractive industry operations, Anglo American are currently applying for nearly 300 licenses to mine the fire-devastated Amazon.

You can also find an excellent video and alternative FAQs on the LMN website on what an outbreak of honesty from “the world’s most ethical mining company” might tell us. 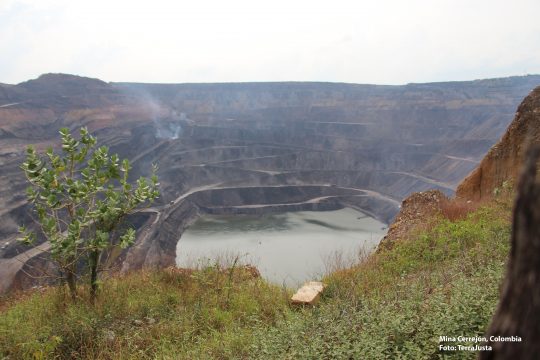 London, UK – On Tuesday 5th May, UK-listed mining giant Anglo American will host its AGM in controversial fashion, in the wake of disturbing revelations about the company’s plans to mine in the Brazilian Amazon and its response to the COVID19 pandemic.

Anglo American has announced that, due to the pandemic, it will hold its AGM behind closed doors this year, with a quorum of just two shareholders present at the meeting. While other companies have opted to move their AGMs online, maintaining access for shareholders, Anglo American is using the coronavirus crisis to avoid accountability and difficult questions over its controversial operations around the planet.

Last month, investigations by Brazilian journalists writing for Mongabay revealed that Anglo American and its two Brazilian subsidiaries have submitted nearly 300 applications to explore for gold and other minerals in the Brazilian Amazon- an ecosystem of global significance in the fight against climate change.

Andrew Hickman from human rights and climate justice organisation London Mining Network says: “The investigations reveal that the company- which refused to answer questions from journalists- has  exploration interests that overlap with the territories of indigenous peoples being repressed by a Brazilian government that is seeking to open the Amazon to extractive industries. In order to grant Anglo American and others exploration permits in these territories the Bolsonaro Administration is seeking to create a new law, in contravention of the Brazilian Constitution.”

Anglo American markets itself as a modern, forward-looking mining company which has “the utmost consideration for our people, their families, local communities, our customers and the world at large”. Actively seeking to mine in one of the planet’s most critical ecosystems, in close collaboration with a Brazilian administration widely viewed as unstable, militaristic and anti-democratic, hardly fits with this rosy image. For critical industry observers, however, it is not as surprising as it may seem.

Today a coalition of frontline communities, human rights and climate justice organisations will challenge Anglo American’s greenwashing at its AGM, presenting evidence of the historic and ongoing examples of company misbehaviour worldwide during the COVID19 pandemic.

“The attempt by mining giant Anglo American to rebrand their destructive practices as being somehow ‘ethical’ rings hollow with the continued failure by its AGM to ensure effective scrutiny and accountability. For those communities already facing the deadly impacts of their operations year on year, and who now face a public health crisis this is not just an insult, but will have lethal consequences”, says Asad Rehman, Executive Director of London-based global justice NGO War on Want.

The coalition will shed light on how Anglo American is advancing its destructive operations in Colombia, Brazil, Peru and Chile. They will share their experiences of how the company is capitalising on the COVID19 pandemic, presenting itself as a solution-bearer to the problems of water scarcity, inequality, mining-related illnesses and malnutrition, which the company has helped to create in the first place.

“As the pandemic crisis deepens, mining companies like Anglo American are jumping at the opportunity to gain good PR. But dropping parcels of food or hand gel in communities cannot solve the chronic health and ecological problems created by mining in the first place. The pandemic is making it abundantly clear that the needs of communities, not mining corporations, are essential”, says Hannibal Rhoades, European Regional Coordinator of the Yes to Life, No to Mining Network.

In Colombia… “Thousands of Indigenous Wayuu children have died of malnutrition and thirst in the region where AngloAmerican is third-part owner of Cerrejon, a huge open-cast coal operation that consumes vast quantities of water. During the COVID19 crisis the company has been delivering food parcels, yet it plans to restart operations in an area where there is little access for communities to health facilities, exposing indigenous and Afro-Colombian communities to a higher risk of infection”, says Diana Salazar, a researcher with Colombia Solidarity Campaign.

“Coal is not a human right, we can live without the exploitation of coal, but we cannot live without water and culture”, says Luis Misael Socarras, of Indigenous association Fuerza de Mujeres Wayuu.

In Chile… “For the last decade, Chile has endured severe drought. This situation is much worse in territories where mining is also present. This is the case for the communities of El Melón and Lo Barnechea who live near Anglo American’s El Soldado and Los Bronces mines. For these communities, mining has brought pollution, water scarcity, disease, land degradation and the destruction of glaciers and native species. They do not have access to drinking water and live in fear because they cannot prevent the spread of the coronavirus”, says Javiera Martinez from the London Mining Network

In Peru… “On March 19th, a bus carrying 32 workers from Anglo American’s Quellaveco mine in southern Peru was detained in Cajamarca in the north of the country for being in violation of the general quarantine decreed by the government. The Governor of Cajamarca initiated a criminal case against the company for putting the population of Cajamarca in danger, describing their actions as “careless and irresponsible”. Anglo American is also at the centre of allegations that it contaminated the Asana-Tumilaca river during the construction phase of the Quellaveco mine. The company has been warned by the Peruvian Ombudsman’s Office about tensions around water access emerging in the company’s area of operations between neighbouring regions of Arequipa and Moquegua in the Tambo river basin”, says Aldo Orellana López of TerraJusta.